Proposal Stories from Our Couples!

A few weeks ago we asked if any of our couples would like to share their proposal stories. We love hearing these! So fun to hear the stories, and we are always honored to be a part of it!

Here are a few proposal stories! Thanks to the couples who replied -- we love it! 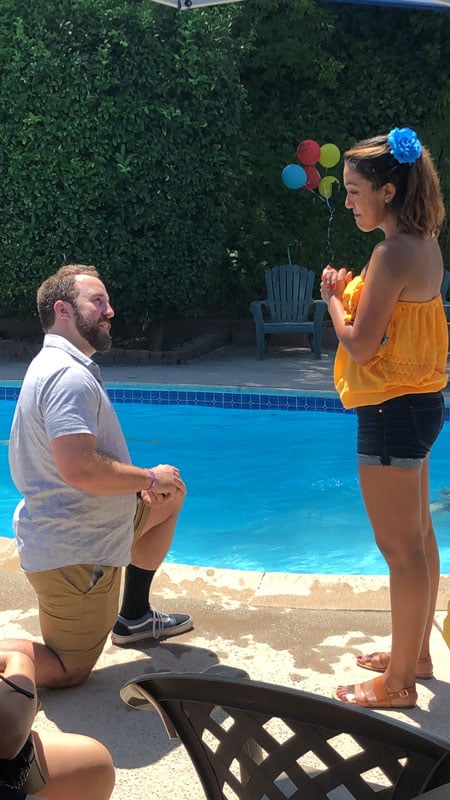 My grandfather was the most important person in my entire world. My father wasn’t a part of my life so my grandpa stepped up and became my father and my grandfather all at once.

I lost him to cancer when I was 14 years old. This July was 15 years since he passed away so I decided to have a celebration of life party with my family to honor him. Little did I know that during the party something else was going to happen...my fiancé propose in front of all of my family!

I found out after that he had bought the ring in February but was waiting for the right time. When I told him my idea about this party he said he knew he had to propose then because he knew my grandpa was there in spirit celebrating with us too. 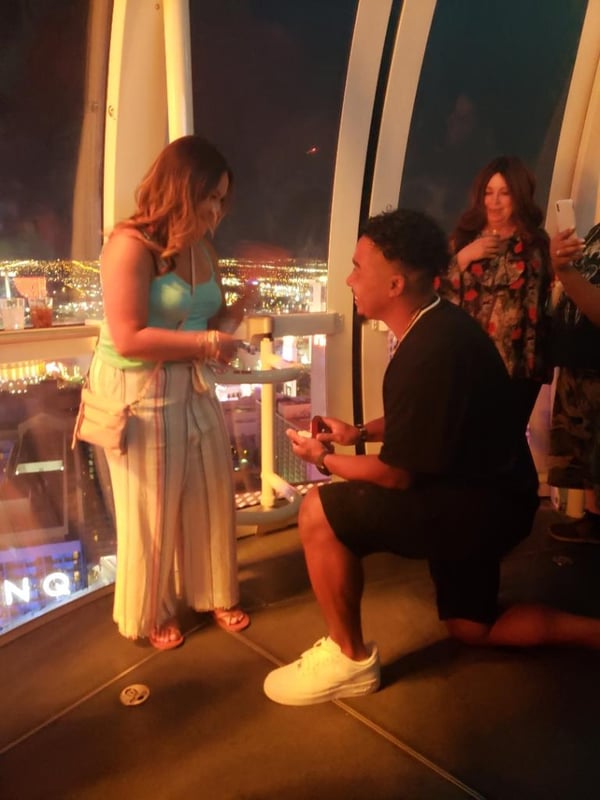 My sweet high school sweetheart and I got engaged in June 2019 at one of our favorite places; Las Vegas! We had never been on the High Roller Farris wheel, but Tony made it a big deal to make sure we got on it the night of the proposal.

I was so tired I suggested we just go back to the hotel and go to bed, it was midnight and we had been up for close to 30 hours. Tony told me, nope we have to do this. It’s going to be great!

So we got on with our friends and a bunch of other people and climbed to the top. All of Vegas was sparkling and looked so pretty. Apparently, while I was gazing at the view, Tony was such a nervous wreck he drank close to 6 small drinks they provide from the bar inside. I didn’t even notice, but once we did reach the top he got down on one knee and asked me to marry him with the most BEAUTIFUL ring! I said YES, of course and everyone around us started cheering and congratulating us!

I was so overjoyed and overwhelmed, I cried and couldn’t believe it all happened. About five minutes later, we looked out and fireworks started going off (unplanned) at the most perfect timing. I am a huge Disney fan and immediately I thought of Aladdin, when at last the two can finally be together.

That’s exactly how it felt, a whole new world ahead of us!️ 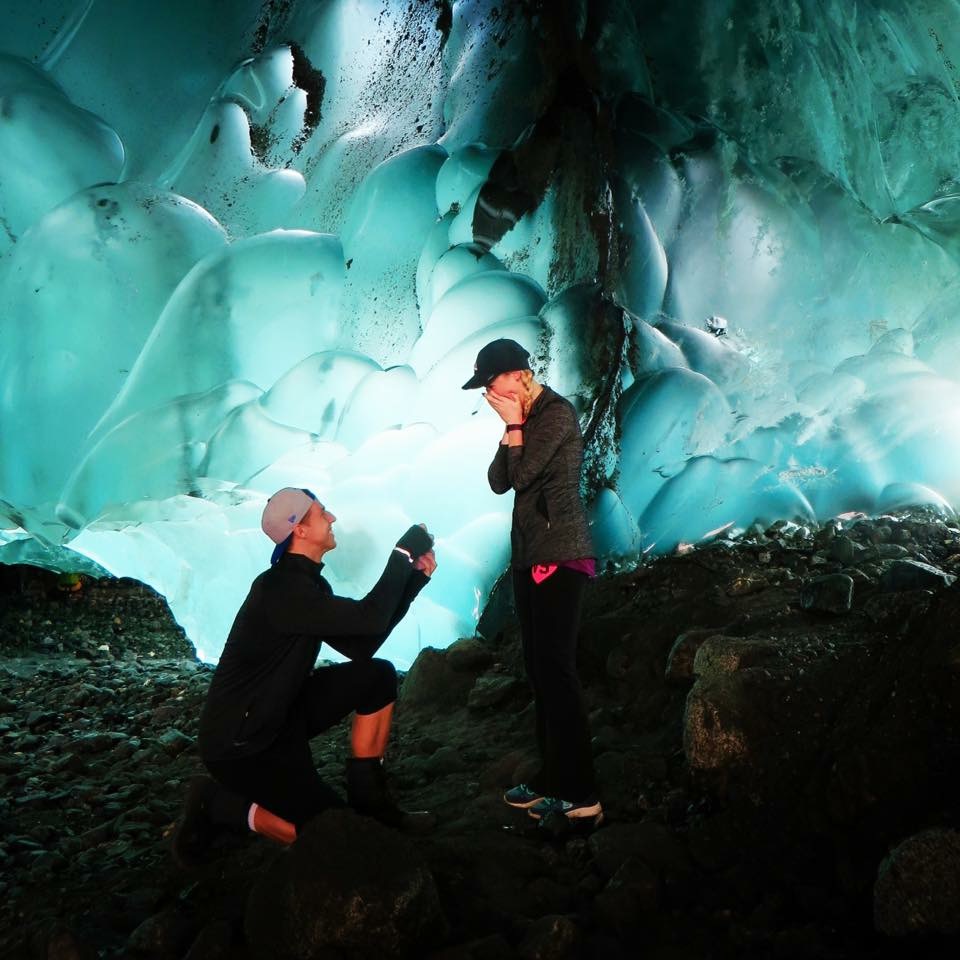 James took me on a 3 hour hike through the lush mountainside of Alaska to Mendenhall Glacier in Juneau. He took me inside an ice cave with some of our friends (one of which who knew what was about to happen and was filming) and asked our friends to take some pictures of us.

As I posed for this picture, I could feel James’ heart racing and I thought something was wrong or that he was worried being inside this cave .... but to my surprise, he bent down on one knee and pulled out a beautiful ring.

I was so shocked that it took me a few seconds to answer him and then I almost fell over with happiness. The most beautiful surprise from my now husband. 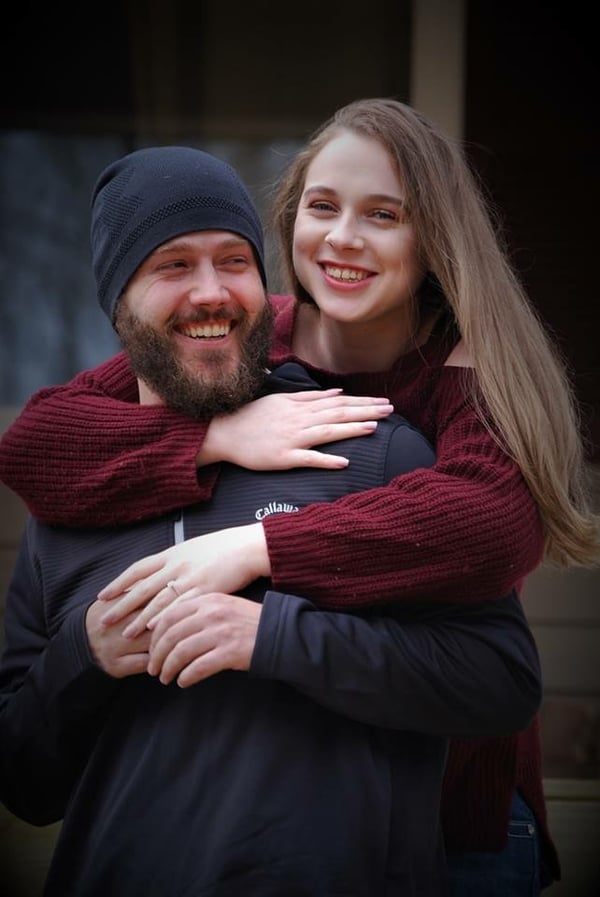 We were having his birthday party at our new house! So the whole week I had been finishing painting and fixing the house up. It was also near Christmas time so I was decorating for his birthday and Christmas trying to make sure everything was perfect. I went shopping and got a bunch of food to make, and even some stuff to make a cake. We had a great time all of our friends loved our new house and we were having a good time playing catch-up.

People seemed really excited for Richard to open his presents, I figured they were excited about what they got him or ready to go but wanted to see him open their gift first. So we did cake and then he started opening his gifts, finally he got to his last gift. It was in a smaller box, but he was so excited when he opened it. He said “Oh man, this is gonna be awesome, oh my gosh!”

Then he started to get up out of his chair and as he was bending down on one knee he said “Abby.. will you marry me?”

I immediately burst into tears and asked “why did you do that?” I was so happy and crying so much I could barely mutter out “YES!”.

After I calmed down and quit crying we FaceTimed my grandparents, who were so excited I think my grandfather even teared up a bit. It was amazing being surrounded by our friends! I love watching the recording they took!

We now are at 5 months until we get married!! Can’t wait to get married in beautiful Hawaii and spend time with our friends and family!! 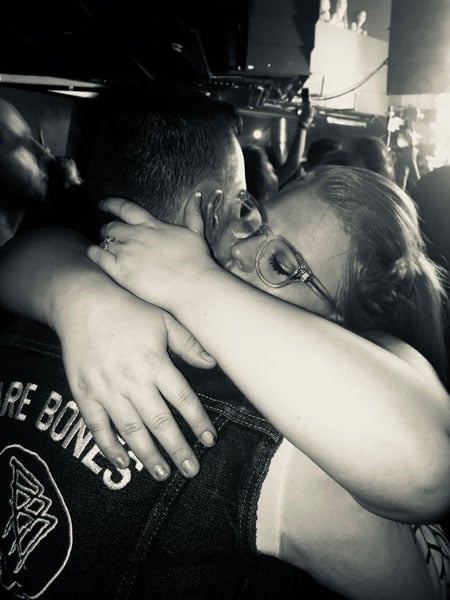 When Jess and I first started dating the song adore by Australian artist Amy Shark had just come out. Fast forward 3 wonderful years and Jess and I were seeing Amy live in concert in Western Australia.

After Amy played adore I grabbed Jess by the hips and spun her around as I dropped to my knee. After many tears and hugs she said yes.

Now on the 1 year anniversary of that night we are in Hawaii to get married and I am forever grateful for the love we have shared and how music has been a part of our story! 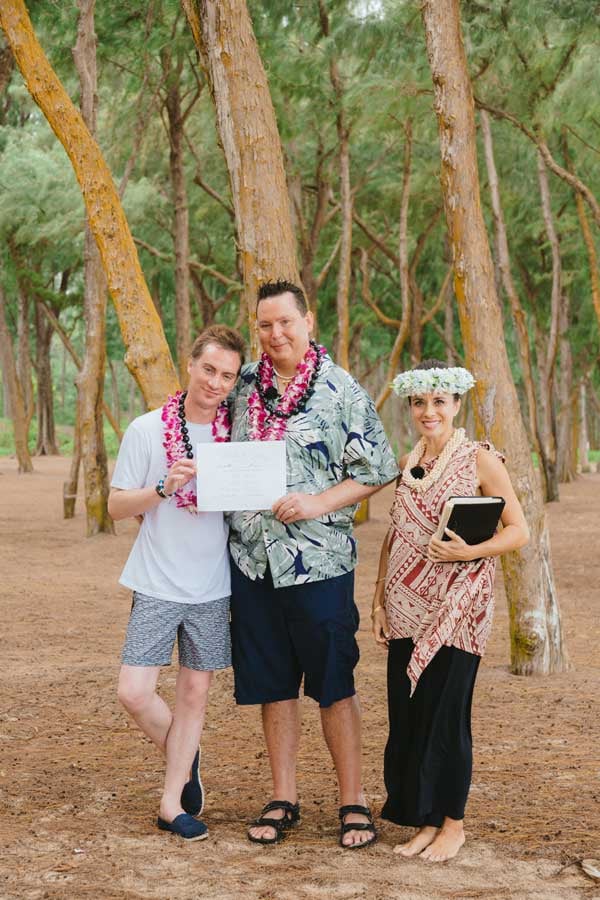 I had been thinking about proposing and getting married for quite sometime as we had been together for almost 9yrs.

It was tax season, we were parked out front of H&R Block as my mother was inside doing her taxes. Paul had been grumpy for several days, which made it difficult to propose. So I asked him, “will you be in a good mood anytime soon? There’s something I want to talk to you about.” He responded by saying, “Whatever you have to say, just spit it out!”

So I did, I asked him to marry me. He was shocked, surprised and his mood instantly changed, as he said yes, gave me a kiss and told me that he loved me.

I then told him I had been planning a destination wedding in Hawaii he became even more excited as Hawaii was a dream vacation of his. My mother returned to the car, we told her our good news, she was excited for us of coarse. We then went to vote for the provincial election, went home, then I contacted Weddings of Hawaii.

Not the most romantic story, but definitely memorable. That’s our history and now we are working on our future and forever.

Topics: Getting Married in Hawaii 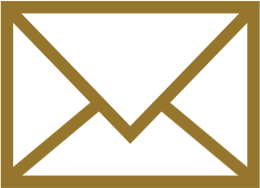